I need some help with a BF4 server. I purchased a 24 slot server but after I have added some maps and changed some things around it stayed at 20 slots, I did some more changes and got it to 24 slots but then looked at it later that day and it had gone back to 20 again. Got it up to 22 slots and after restart it went back to 20. I have spectators set to zero as well so its not that so what am I doing wrong?
Also im using the map cycle option so then what do you chose for this Preset map cycle: ?
The picture is how I have it set right now. 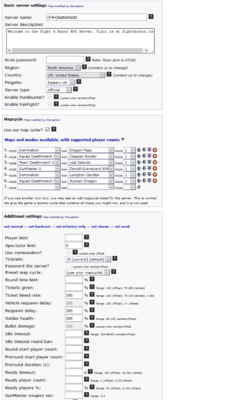 All of the gamemodes you've chosen only allow for 20 players (And 4 spectators). There are a few that allow for 64 and a few that allow for 32, and I think even a 24, but you can find the specific player limits using the expandable "Maps and modes available, with supported player counts" link in the Mapcycle section of the Easy Setup tab of your game server control panel, just below the "Use our map cycler" option.
Top

Your "Servertype" is set to OFFICIAL.

OFFICIAL servers have two COMMANDERS as mandatory. To make things more complicated, your
Rotation includes SQUAD DEATHMATCH, which require that your player slots are evenly divisible by four.

So, with 24 slots at OFFICIAL mode, you will have 22 slots usable. But, 22 slots is not evenly divisible by four. The server then defaults to the lower number (20) that can be divided by four.

If you don't want to add more slots, then the only recourse is for you to
change server type to RANKED. This will give you the 24 slots you need, as long as you have zero commanders and zero spectators. But, if you want OFFICIAL Servertype, then you need to buy two more slots.
Top
Post Reply
3 posts • Page 1 of 1